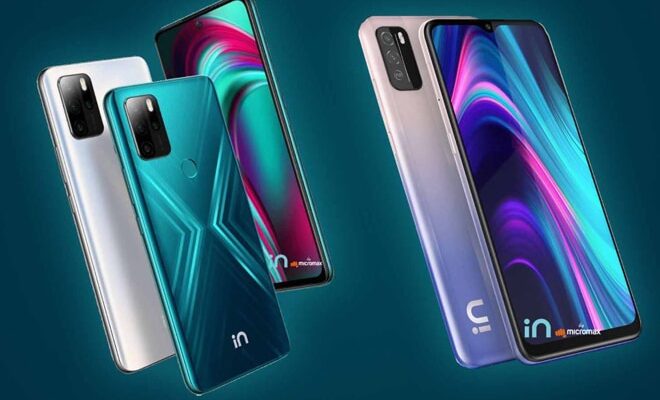 After a Long Wait, new In-series Phones have been launced by Micromax. In the online event, the Micromax CEO revealed two Mobile from In series Note 1 and In 1B. Both these Phones have been brought by the organization in the low budget section and they have a MediaTek processor. The company has given 5000mAh battery with reverse charging in both new devices and these will get stock Android Experience users without any blot ware or pre-installed apps.

The Micromax has brought the new In Note 1 with two variations. The variant of 4GB RAM 64GB storage of this phone has been priced at Rs 10,999. Simultaneously, the second 4GB RAM and 128GB variation can be bought for Rs. 12,499. Secondly, Micromax In 1B has been launched with 4 GB RAM and 64 GB storage and its price has been kept at Rs 7,999. The second 2 GB RAM and 32 GB variation has been available at Rs 6,999. Both devices will be able to be purchased from the official site of Flipkart and Micromax and their sale will start from November 24.

The smartphone has a 6.67-inch IPD LCD display with full HD + resolution. This Mobile is MediaTek Helio G85 processor controlled and will give great performance to the gamer. Discussing camera setups, AI quad camera has been given on its back side, in which a 48-megapixel main camera sensor will be available. Apart from this, 5 megapixel ultra-wide, 2 megapixel macro and 2 megapixel depth sensor is also provided in the module.

The mobile has a big 5000mAh battery with 18W quick charging. The new phone has an Android 10 working framework and it will be given Android 11 and Android 12 update in the following two years. For selfie and video calling, the 16 megapixel selfie camera in the telephone is found in the punch-hole given in the middle.. Its green color variant comes in a X-shaped patterned design. The second white color option has also been given to it.

Buy Micromax In Note 1 In series

Micromax In 1B specifications

The Micromax In 1B, launched at the cheap price, also has a 6.5-inch HD + display. This mobile has the Helio G35 processor from MediaTek. Discussing about camera setup, a double camera with a 13-megapixel main sensor has been given on its rear panel, in which an second sensor of 2 megapixels is available. It has an 8 megapixel selfie camera for selfie and video calling.

The phone will get Android 10 operating system users and Android updates will be given for the next two years. Fingerprint scanner also available on its back side. The device has a big 5000mAh battery, with 10W fast charging. USB Type-C connectivity has been given in the phone and this budget device company has come in Purple, Blue and Green colors.

Buy Micromax In 1B In series

Micromax In series smartphone will be launched today at 12 o’clock, see here LIVE